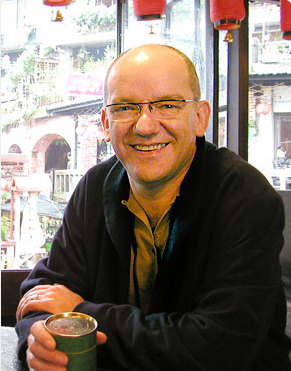 Bob Chilcott is one of the most active composers and choral conductors in Britain today. He has been involved in choral music most of his life - he was a chorister in the choir of King’s College, Cambridge, and sang the “Pie Jesu” on the renowned 1967 King’s recording of Faure’s Requiem, conducted by Sir David Willcocks. He returned to King’s as a Choral Scholar, and between 1985 and 1997 was a member of the British vocal group The King’s Singers. He has been a full time composer since 1997.

Over the last eight years, Bob has poured his energy into choral composition, conducting, and promoting choral singing throughout the world. He is well-known for his compositions for children’s choir, including his piece “Can you hear me?” which he has conducted in the United States, Canada, Australia, Japan, Estonia, Latvia, Germany, and the Czech Republic. He is also associated with the New Orleans Children’s Chorus and the Crescent City Festival in New Orleans, for whom he has written five pieces including “Jazz Mass”, “Happy Land” and “Be Simple Little Children.” He is equally active as a composer of mixed-voice music. He has been the commissioned composer for the last three festivals for the Alliance for Arts and Understanding, promoting singing for boy’s and men’s voices, and pieces for this festival include “In the heart of the world” and ”The Dove and the
Olive Leaf.”

Of his larger works “The Making of the Drum,” a cantata for choir and percussion has been extensively performed, by choirs including The BBC Singers, the Tower New Zealand Youth Choir, the Chamber Choir of Europe and the Taipei Chamber Singers. In 1999 the Finnish Choir Grex Musicus conducted by Marjukka Riihimaki released “The Making of the Drum”, an album of music for mixed choir by Bob. His two larger sacred works, “Jubilate” and “Canticles of Light” have also been performed extensively. In November 2005 Bob conducted “Jubilate” in New York’s Carnegie Hall. He has also written two contrasting works for professional and amateur perfomers to perform together, commissioned by “Making Music.” The first, “A Sporting Chance” was written for Onyx Brass and primary school choirs, and the second, “Tandem,” a work for two orchestras was commissioned in conjunction with BBC Radio Three.

As a conductor Bob has worked extensively with choirs and festivals throughout the world. For seven years he was conductor of the Chorus at the Royal College of Music in London. He is Principal Guest Conductor of the BBC Singers, with whom he works regularly in studio recordings and concerts. He has also guest conducted the RIAS Kammerchor in Berlin, and the Elmer Iseler Singers in Toronto. He has twice been featured conductor for the youth project at Festival 500 in Newfoundland, and has conducted at festivals throughout Canada and the United States, including The World of Children’s Choirs in Vancouver, the Niagra and Toronto International Choral Festivals, and in 2003 was the first non-American conductor to conduct a National Honor Choir for the American Choral Directors Association, and this he did in New York City. He has been a featured conductor for Europa Cantat in Sweden, Germany and Belgium, and this year he conducted for the first time at the renowned Dartington International Music Festival in Britain. He has also been a featured conductor for the Japan Choral Association, and in 2004 was the first foreign conductor to conduct at the Song Festival in Tallinn, Estonia.

A new disc of works by the world renowned choral composer Bob Chilcott. Bob has been involved in choral music for most of his life and since he became a professional composer in 1997 he has had over 100 works published by Oxford University Press. He was hailed by Gramophone magazine as "one of the finest choral composers at work in Britain today." This CD includes tracks with The Sirens, an ensemble of young professional women's voices specially created for this recording. Also featuring are a jazz trio with Alexander Hawkins on piano, Michael Chilcott on bass and Dereck Scurll on drums. The works included here reflect the strong support and interest that Bob's vocal music generates, with commissions from a wide variety of choral societies, children & youth choirs and professional choruses.

The world-renowned choral composer and conductor Bob Chilcott leads the BBC Singers, as well as the internationally recognised soloists Simone Rebello and Paul Silverthorne, in these new performances of some of his best and most loved choral works. The choir is renowned as an expert ensemble and here they sing splendidly under Chilcott's direction. The selection of music on this disc has been well made to give a good variety of perspectives on Bob Chilcott's choral output - a resourceful composer and one who writes exceptionally well for voices and he is superbly served here by the virtuosity of the BBC Singers. This is a glorious showcase of one of the finest choral composers at work in Britain today.

This exciting collection by Bob Chilcott gives a jazzy twist to nine favourite folk songs from around the world. The spiral-bound edition is accompanied by a fantastic backing CD, allowing choirs to perform with jazz-trio accompaniment. Bob Chilcott currently conducts the chorus at the Royal College of Music in London and is in great demand as a guest conductor and leader of choral workshops worldwide. SATB

Nine classic Chilcott songs including original pieces and arrangements of traditional material. The varied nature of the collection highlights Chilcott's prodigious gifts. Some of the pieces are published here for the first time. SATB

The weather, the most quintessentially English of topics, was the inspiration for Bob Chilcott's Weather Report, written for the BBC Singers. Chilcott weaves together a tapestry of well-known weather rhymes to create a work that is energetic, quirky, and entertaining. His choral writing is inventive and full of character, using layered rhythms and jazzy harmonies. This is a fun piece to perform, and perfect as a light addition to any concert programme.

The beautiful eight-part setting of 'My Prayer' starts out with a beautiful alto duet. This challenging piece is a joy to perform and to hear. 'Pray that Jerusalem may have peace' is a Scottish Psalter that was commisioned to commemorate the 150th Anniversary of the consecration of Glenalmond College Chapel. The multiple key and tempo changes make this a challenging but exciting piece to perform. The text in 'God so loved the world' comes from John 3:16. The soprano solo adds a beautiful descant to this touching piece. 'Even Such Is Time' comes from the text by Sir Walter Raleight. The piece starts out with soft, but expressive, four-part harmonies. Half way through the song, the men's parts divisi. The soprano solo at the end adds a great finish. George Herber's text in 'Even-Song' is brought to life with gorgeous harmonies and yet another sweet soprano solo.

These anthems by Andrew Carter, Bob Chilcott, and John Rutter contain ten of their most popular pieces to date. The anthems have been carefully selected to be both approachable to a wide range of choirs and appropriate to the needs of today's liturgy. Together, these collections offer an unrivalled choice of text, style, and scoring, which will make them indispensible and treasured additions to any choir library.

The carols of Bob Chilcott have quickly become classics of the repertoire. Fresh, arrestingly beautiful, and exquisitely crafted, they signal a new direction for carol writing, and appeal to a wide range of singers of all ages. This collection of carols for mixed voices assembles nine of the finest pieces from Chilcott's first ten years with Oxford, including two new pieces specially written for the book. Together, they offer a reat range of styles and moods, and provide a moving narration of the Christmas story that will delight choirs and their audiences for years to come.

These anthems by Andrew Carter, Bob Chilcott, and John Rutter contain ten of their most popular pieces to date. The anthems have been carefully selected to be both approachable to a wide range of choirs and appropriate to the needs of today's liturgy. Together, these collections offer an unrivalled choice of text, style, and scoring, which will make them indispensible and treasured additions to any choir library.

'Singing by Numbers' is a celebration of singing in all its various forms, using a diverse assortment of texts. The seven short movements include items for upper (or children's) voices and men's voices as well as the full choir.

Songs and Cries of London Town

Songs And Cries Of London by Bob Chilcott is a vibrant and varied choral cantata in five movements for SATB choir, upper-voice choir, piano duet, and optional percussion. The two outer movements draw their words and inspiration from "The Cries Of London" by Orlando Gibbons and frame three contrasting middle movements setting a poem each by Dunbar and wordsworth, as well as the anonymous 18th century rhyme "Oranges and Lemons." Together, these settings evoke a surprisingly contemporary impression of London's sights, sounds, and moods, inspiring some irresistible music, by turns contemplative and unquenchably thrilling.

Accessible, relavant, and heart-warming, these pieces will communicate directly with young singers and their audiences and freshen any concert program.

Christmas Spirituals is a fresh and inspiring collection of new spiritual arrangements and orginal pieces in a gospel style for SATB groups of every size and ability. All the best-loved spirituals are here including "Mary Had A Baby", "Go Tell It To The Mountain" and "Rise Up, Shepherd and Follow", whilst the new songs are sure to become tomorrow's "classics". Together, the 12 pieces represent a wonderful diverse telling of the Christmas story to delight and inspire choirs and their audiences throughout this season of the year.