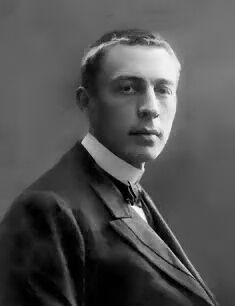 Sergei Vasilievich Rachmaninoff , was a Russian-American composer, pianist, and conductor. ("Sergei Rachmaninoff" was the spelling the composer himself used while living in the West throughout the latter half of his life, including when he became a United States citizen. However, alternative transliterations of his name include Sergey or Serge, and Rachmaninov, Rachmaninow, Rakhmaninov or Rakhmaninoff.)

While his reputation as composer only came later in life, Rachmaninoff's skill as pianist was well-known and highly respected; he often performed his own works as soloist. He was one of the greatest pianists of his generation, having legendary technical facilities and rhythmic drive, and his large hands were able to cover a thirteenth interval on the piano. Many recordings were made by the Victor Talking Machine Company recording label of him performing his own music as well as works from the standard repertoire.

Rachmaninoff made his first tour of the United States as a pianist in 1909, an event for which he composed the Piano Concerto No. 3 (Op. 30, 1909). This successful tour made him a popular figure in America, and he emigrated to New York following the Russian Revolution of 1917. After his departure his music was banned in the Soviet Union for several years. His compositional output slowed to some degree, partly because he was required to spend much of his time performing to support his family, but mainly because of homesickness; he felt that when he left Russia, it was as if he had left behind his inspiration. Nevertheless, his Rhapsody on a Theme of Paganini, today one of his best-known works, was written in Switzerland in 1934.

Rachmaninoff wrote two major choral works: the Liturgy of St John Chrysostom and the All-Night Vigil (also known as the Vespers). The Bells, a work for choir and orchestra, is based on the translated poetry of Edgar Allan Poe; its four-movement program signifies the circle of life: youth, marriage, maturity, and death. The All-Night Vigil and The Bells are widely considered to be some of his finest works.

Rachmaninoff died on March 28, 1943, in Beverly Hills, California, and was interred in Kensico Cemetery in Valhalla, New York.

There are of course many fine versions of Rachmaninov's Vespers with mixed-voice choirs, both within the Russian tradition (for which the work was written) and outside it. This is the first to feature a choir of boys' and men's voices only. The result, whose point of departure was a particularly fine crop of low basses at King's that year, blends one of the finest choirs in the English choral tradition with some of the finest music from the Russian tradition. Furthermore, the beautiful acoustics of King's College Chapel are ideal for this repertoire, since they are not unlike those of a Russian Orthodox cathedral. This disc also breaks new ground in that the recording was originally made in surround sound. Though release in that format awaits further developments in domestic audio technology, the listener should already derive some benefit in the enhanced stereo sound of the present CD.

The Corydon Singers' recording of Rachmaninov's Vespers is extremely moving and beautifully sung. Conducted by Matthew Best with soloists Joya Logan, alto and John Bowen, tenor, it is an outstanding version. The choir has a very warm and rich sound, especially from the basses. This piece requires an enormous range of color from the more introverted "Blagoslovi, dushe moya" to the wildly joyful "Khvalite imya Gospodi." This performance is one of the finest interpretations of this piece.

Some of the most beautiful music in the world can be heard in a performance of Rachmaninoff's Vespers. Better to be described as an All-night vigil, Rachmaninoff uses Russian melodies dating from the Byzantine era. In the Eastern Church, the All-night vigil is observed before religious feasts. This piece is difficult for any non-Russian choir due to the language. The Dale Warland Singers sing with great energy and beautiful dark tones as befits the Russian style.

The period from 1880 to 1917 marked a renaissance in Russian choral music. Previously, Russian choral music had been dominated by German and Italian influences. Now composers returned to old Russian chants as the source of their works, thus creating a thoroughly Russian choral style. Although Sergei Rachmaninov wrote only few choral works, they are among the finest example of Russian choral music ever written. Of those works, the All-Night Vigil (more commonly referred to as the Vespers) stands as his crowning achievement and is widely regarded as the pinnacle of the Orthodox church music as a whole. Composed in 1915, the All-Night Vigil is comprised of texts for services of Vespers, Matins and Prime. In writing the work, Rachmaninov employed a system known as "choral orchestration," which requires singers to make use of a wide range of complex vocal techniques. But for all the innovation and technical prowess evident in Rachmaninov's All-Night Vigil, it is the work's intense emotion and deep spirituality that stays with the listener.

Vespers is a musical setting for a night-long service celebrated in Russian monasteries and Russian orthodox churches. Written at the height of Rachmaninoff's compositional powers, the Vespers setting is considered to be the finest of his sacred works. This lush and beautiful composition for unaccompanied voices, in an eloquent performance by Robert Shaw and his talented festival chorus, is captured dramatically by Telarc in the spacious acoustic of the Church of St. Pierre, Gramat, France. This recording won a Grammy award in 1990.

From 1880 to 1917 was a renaissance in Russian choral music, a great outpouring of sacred compositions by major composers such as Tchaikovsky, Rachmaninov, Chesnokov and Kastalsky. While Sergei Rachmaninov (1873-1943) only wrote a few choral works, they are among the crowning achievements of Russian choral music. "Vsenoshchnoye Bdeniye Op. 37 (Vespers)" encompasses a wealth of moods and emotion, ranging from meditative introspection to praise and proclamation. The 76-strong, award-winning Seattle Pro Musica is the perfect ensemble for this material, dramatically powerful on a piece like "Priidite, poklonimsya," (Come Let Us Worship), sweetly meditative on songs like "Blagoslovi, dushe moya, Gospoda" and "Shestopsalmiye: Slava v vyshnikh bogu" (The Six Psalms: Glory Be to God in the Highest), filled with wonder on "Tropar: Dnes spasneniye" (The Troparion: Thou didst Rise from the Tomb), and joyfully triumphant on "Vzbrannoy voyevode" (To Thee, the Victorious Leader). Truly wonderful, rarely-heard sacred music from one of great composers of all time.

The roots of the Russian Orthodox Church are traceable back into the Third Century A.D. Whilst Western forms of Christianity continued to evolve, the Orthodox tradition has been preserved largely intact since the 11th Century, despite persecution of the Church under an intolerant Communist regime in Russia. The music of the Russian Orthodox Church features vocal chants, the oldest of which is known as znamenny (from the Slavonic znamia meaning “sign”). The melody of this chant is extremely simple, and whilst other composers added their characteristic harmonic effects, Rachmaninoff consciously preserved the modal purity of the original in his setting of the Vespers. The all-night vigil is celebrated on the eve of the main feasts of the Orthodox Church. Originally it lasted all night and consisted of three separate services to celebrate the beauty of the setting sun, and to reflect on the spiritual light of Christ as the new light of the coming day and the eternal light of heaven. Rachmaninoff’s setting of the vigil was written in 1915, in the middle of the First World War. He has used authentic znamenny chant in seven movements, with two movements employing Greek chants. “Even in my dreams I could not have imagined that I would write such a work” Rachmaninoff told the singers at the first performance in March 1915. The work is dedicated to the scholar Stephan Vasilevitch Smolensky who introduced Rachmaninoff to the repertoire of the church, however the composer’s inspiration was as much politically motivated as spiritually – the composition was a powerful affirmation of nationalism during the war. 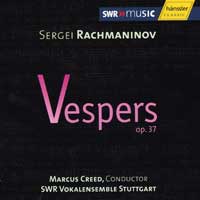 Rachmaninov’s passionate setting of the Russian “All Night Vigil” is to the Eastern Orthodox liturgy what Bach’s B Minor Mass is to the West. Consulting Rachmaninov’s manuscripts and correspondence, and working with Russian language and cultural specialists, the virtuoso SWR Vocal Ensemble, under the direction of Marcus Creed, has drawn upon every artistic source available to make this new recording of Rachmaninov’s transcendent Vespers.