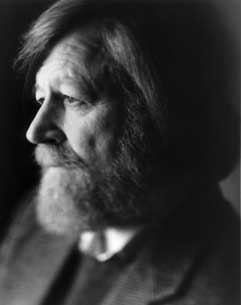 Morten Johannes Lauridsen, Composer-in-Residence of the Los Angeles Master Chorale from 1994-2001 and Professor of Composition at the University of Southern California Thornton School of Music for more than thirty years, occupies a permanent place in the standard vocal repertoire of the Twentieth Century. His seven vocal cycles -- Les Chansons des Roses (Rilke), Mid-Winter Songs (Graves), Cuatro Canciones (Lorca), A Winter Come (Moss), Madrigali: Six "FireSongs" on Renaissance Italian Poems, Nocturnes, and Lux Aeterna -- and his series of sacred a cappella motets (O Magnum Mysterium, Ave Maria, O Nata Lux, Ubi Caritas et Amor and Ave Dulcissima Maria) are featured regularly in concert by distinguished ensembles throughout the world. O Magnum Mysterium, Dirait-on (from Les Chansons des Roses) and O Nata Lux (from Lux Aeterna) have become the all-time best-selling choral octavos distributed by Theodore Presser, in business since 1783. In speaking of Lauridsen's sacred works in his book, Choral Music in the Twentieth Century, musicologist and conductor Nick Strimple describes Lauridsen as "the only American composer in history who can be called a mystic, (whose) probing, serene work contains an elusive and indefinable ingredient which leaves the impression that all the questions have been answered... From 1993 Lauridsen's music rapidly increased in international popularity, and by century's end he had eclipsed Randall Thompson as the most frequently performed American choral composer."

A recipient of numerous grants, prizes and commissions, Mr. Lauridsen chaired the Composition Department at the USC Thornton School of Music from 1990-2002, and has held residencies as guest composer/lecturer at over two dozen universities. His most recent commissions have been from Harvard University, the San Francisco Bay Brass, and the Raymond Brock Memorial Commission for the American Choral Directors Association's 2005 national convention in Los Angeles.

Raised in Portland, Oregon, Mr. Lauridsen (b. February 27, 1943 in Colfax, Washington) attended Whitman College and worked as a Forest Service firefighter and lookout (on an isolated tower near Mt. St. Helens) before travelling south to attend USC, where he studied composition with Ingolf Dahl, Halsey Stevens, Robert Linn and Harold Owen. He divides his time now between Los Angeles and his summer cabin on a remote island off the northern coast of Washington.

As their recording of Eric Whitacre had a chart-topping run on both sides of the Atlantic, Stephen Layton and Polyphony returned to the studio and put down a second disc devoted to the choral music of Whitacre’s compatriot Morten Lauridsen. The popular cycles Mid-Winter Songs and Les chansons des roses (the final number of which, "Dirait-on," caused something of a publishing sensation on its first appearance) are joined by four premiere recordings: two early Psalm settings, and two new works written during the preparations for this recording. Performances from Layton and musicians are every bit as polished as we have come to expect. Polyphony is joined by the Britten Sinfonia for the Mid-Winter Songs, Andrew Lucas for the organ-accompanied Psalm and the composer himself on finger cymbals for Ave, dulcissima Maria. This new disc is certainly a worthy successor to the same forces' GRAMMY© nominated Lux aeterna.

Considered to be one of America's foremost contemporary composers Morten Lauridsen is a master of writing choral music that is harmonically lush, contrapuntally interesting, melodically memorable, and gratifying to sing. This disc brings together four of his most popular works, which include three cycles -- Les Chansons des Roses, Lux Aeterna, Madrigali -- as well as his setting of O Magnum Mysterium. The Chamber Choir of Europe, conducted by Nicol Matt, sings with warmth and a secure tone. Matt conducts with sensitivity, giving the music plenty of room to breathe, with tempos generally on the relaxed side. The choir is particularly effective in the moving and densely chromatic a cappella O Magnum Mysterium. Lux Aeterna is heard in its version with organ, played by Jörg Halubek, rather than with instrumental accompaniment. The composer provides sensitive accompaniment on the piano in "Dirait-on," the final (and only accompanied) song in Les Chansons des Roses. The sound is warm and intimate. While the performances fall short of being sublime, this CD would be a good introduction to the variety of Lauridsen's work for anyone interested in accessible and gratifying new choral music.

Stephen Layton directs his 21-mixed-voice Polyphony, which he founded in 1986 at King's College, Cambridge, in some of Morten Lauridsen's most beloved works, accompanied by the Britten Sinfonia. The 5 movements of title tune are first, and is as lovely (accompanied, of course) as we have ever heard it. "Madrigali: Six Fire Songs on Italian Renaissance Poems" follow, exuberant, spirited a cappella pieces. The recording concludes with Lauridsen's beautiful a cappella "Ave Maria," haunting, chantlike "Ubi caritas et amor" and the classic "O magnum mysterium." Lauridsen is pictured in the extensive liner notes giving his personal direction to the making of this very fine CD. The best of Lauridsen from talented Polyphony, directed by Layton, and with a wonderful Pre-Raphaelite painting of an angel on the cover—who could ask for more?

Morton Lauridsen is Composer-in-Residence for the Master Chorale and Chair of the Dept. of Composition at USC. These original works are performed by the Chorale under the direction of Paul Salamunovich. Accompanied by the Sinfonia Orchestra, this recording was Grammy nominated, and has been in high demand since its release. Containing works written in the past decade as well as three world premiere recordings (seventeen tracks in all) it begins with the self-titled "Lux Aeterna," a five movement work that draws upon Latin texts, each containing references to Light. Next are the exquisite "Chansons Des Roses," set to poems of Rainier Maria Rilke. "Ave Maria" is an a cappella motet, and "Mid-Winter Songs" is a choral cycle using winter as its unifying motif. The result is ethereal, inspiring and above all, flawless.

Morten Lauridsen is America’s preeminent composer of choral music. Characterized by long, arching and highly expressive lines, his works are enjoyed by performers and audiences worldwide. O nata lux, perhaps Lauridsen’s most popular work, is a serene evocation of heavenly light, while the searingly intense and technically demanding Madrigali inhabit a more feverish and earthy realm. The refined Les Chansons des Roses employ a design reminiscent of the formal gardens, filled with roses, found in the grounds of the great French châteaux. The unforgettable final movement is the now-famous Dirait-on. The Mid-Winter Songs for chorus and piano are a stunning example of compositional virtuosity. O magnum mysterium, for a cappella chorus, is a setting of a Christmas text that has inspired composers from Victoria to Poulenc.

Choral Cross-Ties, a mixed 24-singer chorus directed by Bruce Browne who founded the group in 1985, bring us 3 choral cycles by composer Morten Lauridsen, "Mid-Winter Songs," on poems by Robert Graves; "Madrigali: Six Fire-Songs," on Italian Renaissance poems; and "Les Chansons Des Roses," on poems by Rainer Maria Rilke. Reading the beautiful poetry which inspired Lauridsen in the extensive liner notes, the Graves in English, the Madrigali in Italian and the Chansons in French (all with translations), adds to our appreciation and feeling for the music. Lightly accompanied on piano, "The Complete Choral Cycles" is an extensive, demanding work made to look easy by a wonderfully versatile chorus.

Morten Lauridsen has become one of America’s most widely performed composers. His "O Magnum Mysterium" has been performed thousands of times since the 1994 premiere by Maestro Paul Salamunovich and the Los Angeles Master Chorale. With "Dirait-on" these two works are the all time best selling choral octavos distributed by Theodore Presser, in business since 1783! Northwest Journey features world premiere recordings of art songs, choral works and chamber music featuring superb musicians and vocalists. This musical offering spans the range of Morten’s work. "Where Have the Actors Gone" gives one the sense of an allegorical ending to a relationship which might be found in a stage setting of musical theatre. From his beloved choral set, "The Songs of the Roses," comes a new arrangement of "Dirait-on" written for vocal duet. There is the unaccompanied motet, "Ubi Caritas et Amour." "A Winter Come" deftly takes the imagery of Howard Moss’s verse and presents it in a marvelous variety of moods using amazing piano composition to accompany the soprano voice. García Lorca’s poetry is presented in the musical setting of the "Cuatro Canciones," each song based on a wider interval than the previous. And then we arrive at the finale, a new arrangement of the beautiful "O Magnum Mysterium" which presents the power of the original choral version carefully preserved in this premiere recording for solo voice. Wonderful!

This collection of Lauridensen's aural artisanship contains hits such as "O Nata Lux," a serene a cappella motet celebrating the Redeemer, "Ubi Caritas Et Amor," a motet composed "in celebration and gratitude for the glorious and enduring service to God," as well as a setting of "Ave Maria" specially composed as a seventieth birthday gift to Maestro Salamunovich.

"Les Chansons des Roses" is a collection of compositions based on the poetry of Rainer Maria Rilke. Says Lauridsend of his selection: "[Rilke's] poems on roses struck me as expecially charming, filled with gorgeous lyricism, deftly crafted and elegant in their imagery. There exquisite poems are primarily light, joyous and playful, and the musical settings are designed to enhance these characteristics and capture their delicate beauty and sensuousness."

To find songs by this or any other composer
type the name are searching for here: