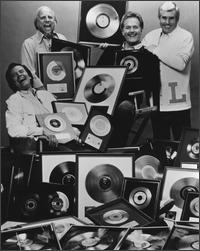 The Four Preps formed in the early 50s in Hollywood, CA and consisted of founding members Bruce Belland, Glen Larson, Marvin Inabnett and Ed Cobb (d. 1999, Honolulu). Recording for Capitol Records, they placed 13 singles in the US charts between 1956 and 1964, two of which made the Top 5 in 1958. The quartet began singing together during their high-school years, influenced by the Mills Brothers, Four Aces, and Four Freshmen acts. Impressed by a demo tape the group recorded Mel Shauer, manager of Les Paul And Mary Ford, took the group under his wing and arranged a recording contract with Capitol. Their first session, in late 1956, yielded "Dreamy Eyes", which was a minor hit, but the follow-up, "26 Miles (Santa Catalina)", written by Belland and Larson years earlier, reached number 2, and their next single, "Big Man", made number 3.

Subsequent singles failed to reach the US Top 10 although the group did achieve a Top 10 album, Four Preps On Campus, in 1961 during the height of the folk music revival in the USA. The group's final charting single, 1964's "A Letter To The Beatles', parodied Beatlemania but was allegedly withdrawn from distribution by Capitol upon the request of the Beatles" management. The group continued until 1967. Cobb went on to join the group Piltdown Men, and later to produce such records as the Standells' "Dirty Water"; he also wrote "Tainted Love", a hit for Soft Cell in 1982. In 1988, the Four Preps were back on the road, with two of the original members, Belland and Cobb, being joined by David Somerville, former lead singer of the Diamonds and Jim Pike, founder of the Lettermen.

Hollywood High's class of 1955 included The Four Preps, who were shamed to memorize a Four Lads album to audition for the Senior Talent Show because 35 girls tried out and no boys. Shopping a recording of a show they did at a UCLA sorority to various agencies, the Preps landed a seven-year recording contract at Capitol Records, for whom they recorded several pop hits. "26 Miles" (Santa Catalina) was first rejected by Capitol, until they played it for Nancy Sinatra at a party, who loved it. Capitol relented, and it climbed to #2 pop and #6 R&B in 1958. "Big Man," "Dreamy Eyes," "Down By the Station" (Early In the Morning) were all (accompanied) pop favorites, but the Four's sense of humor and gift of doing impressions of other groups really shine on "Got A Girl," the live cuts "More Money for You and Me" (medley), "The Big Draft," "Great Songs Medley" and "A Letter to the Beatles," which was withdrawn after the Fab 4 threatened legal action (no sense of humor, apparently). A cover of Phil Och's "DraftDodger Rag" and the group-written "The Big Draft" try to be funny, but the idea of being drafted and sent to Vietnam was not, so these seem naïve to us now. The Preps had a fun 12 years together before going their separate successful ways in the entertainment industry. "Absolutely" has the best recordings from this heady period, a long way from Hollywood High, and there's a lot of good, funny stuff here!

The Four Preps were a wholesome, clean-cut group who had 13 chart hits between 1956 and 1964. A Capitol Records scout discovered them while they were performing at a Hollywood High talent show. Among their biggest hits included in this 20-track collection are "26 Miles (Santa Catalina)", "Big Man", and "Down By The Station (Early In The Morning)". One of the Preps, Glen Larson, later became the well-known TV producer of "McCloud", "Quincy", "Battlestar Gallactica", "Magnum P.I.", "The Fall Guy" and others.