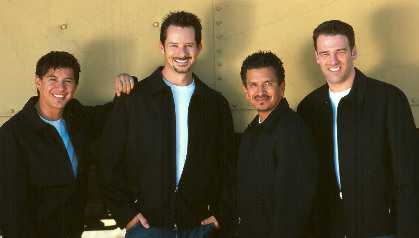 By bringing their own contemporary style to tunes from the 1950s and 60s, The Alley Cats appeal to fans of all ages, breathing new life into everyone's favorite doo-wop classics. The four members of The Alley Cats are a perfect blend both vocally and personally. More than a decade after they began, Royce Reynolds, whose solid bass vocals create the Cats' musical foundation, and Mando Fonseca, the second tenor always ready with a pun or quick quip, have the ease of familiarity which make their camaraderie and vocal play radiate from the stage. Baritone Sean Devine, whose smooth vocals melt hearts the world over, and newest member Juan Del Castillo, re-creator of all of those soaring 50s first tenor lines, bring their freshness and talent to an already solid foundation of a cappella tradition. Together they are truly the Cat's meow!

The Alley Cats were formed in 1987 at Fullerton College in California, and began their musical journey with Disney's Blast to the Past salute. They went on to win the Southern California Harmony Sweepstakes, which led to appearances on The Home and Family Show, Good Morning Arizona, NBC's Madman of the People, The Arsenio Hall Show, CD Highway, Richard Simmons' workout video Dance Your Pants Off, recordings for Fox Kids' Why Why Family and a radio spot for Sunkist. Their long standing relationship with Disney took the Cats to New York, where they were featured during the world premiere of Disney's animated feature Hercules, and back to LA. for the Hercules' Forum of Fun at the El Capitan Theatre.

The Cats have appeared at numerous fairs and festivals around the country and have been the featured performers on stages at Disneyland, Knott's Berry Farm, and Hersheypark. They have worked with major corporate clients Daewoo Motor Co., Walt Disney Co., D-Link, LGE, Charles Schwab, and Secure Horizons, entertaining and enlightening audiences while sharing information about products at major trade shows such as COMDEX and Networld+Interop Las Vegas as well as at private corporate events. The Alley Cats have opened for such notable artists as Chubby Checker, The Coasters, Bill Medley, Sha Na Na and The Tokens, as well as sharing the stage with fellow a cappella artists The Bobs, The Blenders, The Nylons, and Rockapella.

Every Alley Cat performance is accompanied by the sounds of laughter and voices joining in to sing the melodies we all know and love. The Cats' engaging wit and humor have won over audiences nationally as they relate directly to the crowd with jokes, stories, and audience participation that appeal to young and old alike. Tight harmonies, universal humor, and unbelievable a cappella energy have made The Alley Cats America's premier doo-wop group.

A Christmas Long Ago

Our favorite Doo-Wopping Cats, who cut their a cappella teeth with Disney (like Sweeps winners Toxic Audio) and won the So. Cal. Harmony Sweeps, celebrate their 18th year together by finally saying yes to the many fans who have asked for a Christmas album. The upbeat, nostalgic original "A Christmas Long Ago," a wonderfully Doo-Woppy "Let It Snow," a bluesy "Please Come Home for Christmas" to slow dance to, a finger-snapping, Bing-imitating "White Christmas," some yummy falsetto on the Beach Boys' "Little St. Nick," a silly, manic "Rudolph The Red Nosed Reindeer," a very funny "Blue Christmas" (Yes, Royce "Elvis" Reynolds is back!), a rhythmic, joyous "Feliz Navidad," a sweet baritone lead on "Sleigh Ride" and closing with the bluesy-jazz harmonies of "What Are You Doing New Year's Eve;" it's all good. Yummy deep-bass harmonies, lots of the Cats' trademark humor, great arrangements by the group and in collaboration with original Cat Todd Dixon--"Long Ago," the group’s 5th winner, is a stone joy, and you should also check them out live in concert in their hot DVD!

While entertaining thousands as Disneyland's house band, (and performing a killer "Showcase Concert" at the West Coast Summit), the four-man Alley Cats, "America's Premier Doo-Wop Group," released three great studio recordings and gained many fans in concert. "Drive-In" puts us in the audience of an electric, hilarious live performance, at the Oxnard Performing Arts Center in 2003. 19 songs, like "Sh Boom," The Temptations' "My Girl," Del Shannon's "Runaround Sue," "La Bamba," "Sixteen Candles," "Don't Be Cruel," "Poison Ivy," "Stand By Me" and more. But the big fun of the Alley Cats' stage act is more than just top-drawer Doo-Wop--these guys are stone entertainers whose patter and interactions with the audience (and a great Neil Diamond impersonation) are a scream. "America's Premier Doo-Wop Group?" We'll buy that!

If butter melts in your mouth, the Alley Cats arrangement of "Smoke Gets In Your Eyes" will melt in your mind! It is beautiful, smooth, and just melts away the bands of every day tensions from around the heart. Then you'll just have to swoon to one of the sweetest versions of "Only You" which you will ever hear. Thank goodness they launch into a upbeat "Blue Moon" or you would end up in a emotional puddle on the floor! If you ever were touched by the romantic songs of the fifties and sixties (and a sound alike or two from the seventies), this recording is for you. Frankly, we've never heard a better recording of era's music. The voices are beautiful, the slides into falsetto breaks is seamless, and the arrangements keep true to the originals while filling out the instrumental parts with vocals. The Alley Cats have presented all of the greatest songs of an era, "Silhouettes," "Twilight Time," "Earth Angel," "Stand By Me," and more, sixteen cuts in all. The tempos and arrangements vary so you never become complacent and let a tune slide by out of predictability, but rather have to pay attention to each sweet riff. We gush, we enthuse, and we have only this to add, "yip yip yip yip, mum mum mum mum, get a job!" With your first paycheck be sure to get the Alley Cats, "Strike 3."

Real Audio songs: "Rockin' Robin" and "At the Hop/Jump, Jive an' Wail" in Real Audio.

The Alley Cats, from Southern California, are your destination for fun! This four piece doo wop group also incoporates classics such as "Barbara Ann" and "La Bamba" into their terrific repertoire, which includes can't-miss hits like "Under the Boardwalk" and "Why Do Fools Fall in Love." They mimic psychedelic guitar twanging on "Love Potion #9" and sizzle with finger- snappin' energy on the arpeggiated chords of "Rock and Roll is Here to Stay." "Runaround Sue" crackles with energy and humor-these guys are clearly veteran performers. A highly professional and entertaining recording. These Alley Cats will win you over!

The enthusiasm of the Alley Cats is so infectious and their energy so buoyant that they can make you like any song they sing. It's true! Having gotten their start at Disneyland's "Magic Kingdom," they exhibit a merry disposition that bursts through even on CD-they cannot be contained! A host of classic tunes such as "Book Of Love," "Don't Be Cruel" and "Duke Of Earl," which could be perfunctory in lesser hands, are pounced on by the Alley Cats, and are the better for it. The arrangements are familiar but with a little added pizazz (we'd encourage more!), the intonation crisp, the rhythms fluid. A highly professional and entertaining recording.

When we first saw the Alley Cats it was giving a "showcase concert" on a small school stage at the A Cappella Summit, singing 4 or 5 songs. What was clear was that these four young guys simply performed sweeter, better-arranged, funnier, more together Doo-Wop than anyone we had ever heard. "9 Lives" (9 "live" performances, get it?) proves that they are even more so now. Their song selection includes our very favorites: "Blue Moon," "Duke of Earl," "Come Go With Me," "Little Darlin'," "La Bamba," "Little Bitty Pretty One," "The Book of Love," "Barbara Ann," plus 3 bonus tracks, including "The Lion Sleeps Tonight," "Smoke Gets In Your Eyes" and "Rock N Roll is Here to Stay." The DVD includes cool footage from their appearances on Arsenio Hall and other shows, and begins with live songs from an outdoor California festival, then follows the guys on their ride to Vegas for very hot performances and outtakes there. Alley Cat fans, you of course will buy this DVD because you know that the Cats are "America's Premier Doo-Wop Group." Those unfamiliar with the group, you of course will want to see how good you have to be to bill yourself as "America's Premier Doo-Wop Group," and you won't be disappointed. We love these guys, and "9 Lives" is a treat from beginning to end!