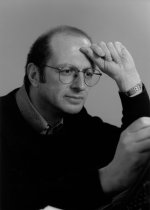 The Finzi Singers were founded by Paul Spicer in 1987 for a Festival of the British Music given under the auspices of the Finzi Trust. They are now regarded as the major exponent of British twentieth-century choral music in which they specialize. The choir presents original and interesting programmes with a special emphasis on contemporary repertoire. Commissioned works and first performances include music by Michael Berkeley, Judith Bingham, John Joubert, David Matthews, Stephen Pratt, Jeremy Dale-Roberts, John Tavener and James Wishart. Concerts and recordings alike have met with considerable critical acclaim.

Paul Spicer began his musical training as a chorister at New College, Oxford. He studied with Herbert Howells and Richard Popplewell at the Royal College of Music in London, winning the Walford Davies Organ Prize in his final year (the top award). He taught music for ten years from 1974 at Uppingham School and Ellesmere College before becoming a Producer for BBC Radio 3 in 1984, and Senior Producer for the Midlands Region in 1986 based in Birmingham. In 1990 he became Artistic Director of the Lichfield International Arts Festival, and also Director of the Abbotsholme Arts Society, posts he relinquished in July 2001 in order to pursue a completely freelance musical career.

Britain's Finzi Singers, under the direction of Paul Spicer, specialize in twentieth-century British choral music. This CD, the third in a series featuring an all-Britten program, includes one of his earliest works, written while he was at the Royal College of Music and experimenting with serial procedures: "A Boy Was Born." One of his last compositions, "Sacred and Profane," written the year before his death in 1976, is a cyclic setting of verse from the 12th and 14th centuries. Also included are "Five Flower Songs" (1942) and "Advanced Democracy" (1938, reflecting the political unrest in Europe). As is typical of contemporary classical, the sound can be tonally ambigious, stylistically discordant and disturbing, though expertly realized.

The second installment of the Britten Choral Edition opens with the spirited and little-known Jubilate in E flat (1934), and gives great pleasure throughout. The opening of the Te Deum, for instance, is energetic in its precision. The opening of the Sanctus in the Missa brevis similarly bears an extra splendour of tone and movement. Sweet was the Song the Virgin sang (1931 and second term at the RCM) has an uncanny sureness of touch, and "Thou art the King of glory" erupts with color vitality in rhythm. The Missa brevis too gains with each listen, although Gramophone (Augsut, 1998) reminds of us to question of the use of women's voices instead of boys'. "Something is lost, even here, and going back to Britten's own recording of the Ceremony of Carols with the Copenhagen Boys' Choir (odd as they often sound to our ears) one again misses something distinctive on return to the ladies ­ whether of the Finzi Singers or The Sixteen."

This is the first volume of the Britten Choral Edition series. The recital opens with four masterful hymns that exhibit Britten's creativity, including the Hymn of St Columba (1962) and the Hymn to the Virgin (1930), which serve as testaments to the skill he possessed at age 16. The recording continues on to the frequently-recorded Rejoice in the Lamb (1943), the delightful Choral Dances from "Gloriana" and concludes with A.M.D.G. The Finzi Singers' Britten Choral Edition cannot escape comparrison to (if not competition with) the three-disc Britten set previously released by The Sixteen. In regard to the two series, as weighed in a review by Gramophone (August, 1998), "there is no clear-cut decision. Balance differs somewhat in the two recordings, The Sixteen having a fuller, more sonorous presence, the Finzis giving more prominence to the organ in accompanied items. Andrew Lumsden's contribution may indeed help to tip the balance further in the Finzis' favour for he is constantly bringing out something in colour or rhythm that adds flavour and distinction."

As directed by Paul Spicer, this English mixed ensemble has devoted themselves to the promulgation of British choral works. The relatively obscure Gustav Holst composed during the turn of the century, whereas Vaughan Williams began his career slightly later, by collecting English folk songs, ultimately accumulating over eight hundred! Later, Williams wrote various pieces for royal occasions and the like, such as "The Souls Of The Righteous" to dedicate the Battle Of Britain chapel. Sometimes dark and mournful ("Valiant For Truth"), hearty and powerful ("Sing Me The Men"), eerie and captivating ("Full Fathom Five") or gentle and pure ("O Lady, Leave That Silken Thread"), this collection is always uncompromised in excellence.

This is another exemplary addition to the Finzi Singers' ever-expanding discography. The earliest offerings here include "Even Such Is Time," an unpublished effort from 1913, and spans all the way to 1970, with "and Thee I Will Love," a heartfelt setting from 1970 with words by Robert Bridges, "commemorating the massacre of the monks of the Abbey of Medehamstede - now Peterborough Cathedral - in AD 870". As we have now come to expect from this partnership on record, these are splendidly fervent, finely disciplined performances (one readily forgives the occasional raw sonority from the sopranos). Excellent Chandos engineering, too. A hearty recommendation.

This is another in a series of Christian church choral works of relatively unknown British composers, performed by the 20-strong mixed choral group founded and directed by Paul Spicer. Sir William Walton lived on the island of Ischia, near Naples, Italy, in a lush, subtropical house and grounds, created by his wife Susana and himself, who had no children and made the estate and Walton's music their life's work. 18 of Walton's finest works are presented here, some with full, magnificent organ behind the voices, some a cappella--all have stature, be it an exquisite miniature like "Set Me as a Seal upon thine Heart," or a major score like "The Twelve," surely, with "Where does the Uttered Music Go?" his two finest works. There are 4 lovely Christmas carols, "Make we joy now in this Fest," "What Cheer?," "King Herod and the Cock" and "All this time." The Singers do seemingly effortless justice to some difficult, demanding work by this surprising, mostly self-taught British genius. All lyrics and information are in the extensive liner notes.

This is another exemplary addition to the Finzi Singers' ever-expanding discography. The earliest offerings here include "Even Such Is Time," an unpublished effort from 1913, and spans all the way to 1970, with "and Thee I Will Love," a heartfelt setting from 1970 with words by Robert Bridges, "commemorating the massacre of the monks of the Abbey of Medehamstede - now Peterborough Cathedral - in AD 870". As we have now come to expect from this partnership on record, these are splendidly fervent, finely disciplined performances (one readily forgives the occasional raw sonority from the sopranos). Excellent Chandos engineering, too. A hearty recommendation.

In a series focusing on sacred 20th century choral works of British composers, the 20-strong mixed choral group The Finzi Singers, founded and directed by Paul Spicer, have presented some brilliant works by relatively unknown composers. Herbert Howells, described as "the central composer for the 20th century Anglican liturgy," is hardly unknown, but here are early works for the church that were believed lost up until very recently. Included are 15 of Howells' songs, including the 8 soaring movements of "Mass in the Dorian Mode, "Salve Regina," "O salutaris Hostia," "Sweetest of Sweets," "Come My Soul," "Antiphon," Nunc dimittis" and Regina caili," Following are works by Bernard Stevens, like Howells, closely associated with the Royal College of Music. The 5 movements of his 1939 "Mass for Double Choir," "Kyrie eleison," "Gloria," "Sanctus," "Benedictus" and "Agnus Dei" are striking works by a brilliant composer whose works are under-performed and under-recognized today. The Finzi Singers are one of the best church choirs we've heard, and they have recorded a very special CD. The extensive liner notes have all lyrics and information about the composers.

Here is another excellent record by the Finzi Singers in a series which is proving as valuable as anything in the current lists. They have standards in their choice of music as in their manner of performance, and everything they have undertaken in their recordings has been in a tradition of good workmanship and good taste. This present programme, with its alternation of works by Howells and Vaughan Williams, illustrates the individuality of both composers as well as the shared possession of a culture deeply loved and richly imbued. All are finely caught in these performances, not least the aeroplanes in Harry Bickett's imaginative registration and skilful playing. Choral tone, the work of soloists drawn from the choir, recorded sound, written presentation, all are admirable features of a highly recommendable disc.

The Finzi Singers are a 20-strong, mixed British choral group, founded by Paul Spicer in 1987 for a Festival of British Music given under the auspices of the Finzi Trust. They are now regarded as the major exponents of British 20th-century choral music, in which they specialize. For the Chandos label, the Finzis are recording a wide variety of British music, much of which has never been heard before. This is the music of Kenneth Leighton (1929-1988) all eclectic, powerful Christian choral music, 8 songs in five groups: "God's Grandeur," "What Love Is This Of Thine?," "Give Me the Wings of Faith," "Crucifixus pro nobis, Op. 38," which has four parts, "Christ in the Cradle," "Christ in the Garden," "Christ in His Passion," and "Hymn," and "Lully, Lulla, Thou Little Tiny Child" first composed when Leighton was only 18. Difficult, dissonant, soaring passages are easily handled by the Singers, who treat us to some amazing music by an fine, relatively unknown composer. Some organ accompaniment. Extensive, detailed liner notes.

Given performances as openly sincere and sensitive as these, few could remain unmoved. Bethlehem Down with its haunting, desolate air is the best-known work here but it only hints at the emotional intensity of such wonderful carols as The full heart with its exotic harmonies and complex part-writing and the ravishingly beautiful Corpus Christi. The relationship between Warlock and Moeran can be overworked: musically the connections seem largely superficial. Not for Moeran the pained utterances of a twisted soul, but in these two matchless madrigal suites there is an indefinable Englishness-the result of a deep awareness of tradition and love of the countryside. Again the innate musicality of the Finzi Singers pays handsome dividends; these warm-toned, richly expressive voices (not least Andrea Gray and Andrew Carwood, magnificent soloists in Warlock's Corpus Christi) seem to capture the very essence of this uniquely lovely music.