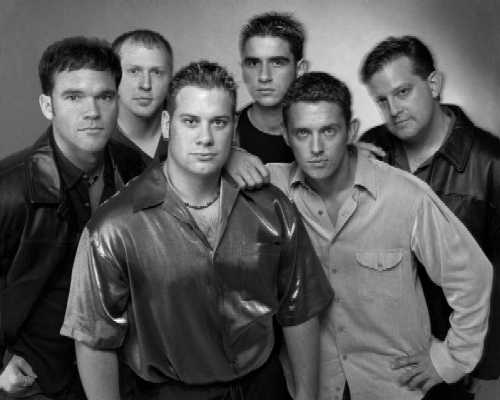 Vocal Tonic is a 6-man vocal band based in Atlanta, Georgia, which is fast becoming The a capella hub of the nation... well, at least in the South. Repertoire is mainly pop/rock, with a touch of jazz and r & b thrown in for good measure. Currently celebrating the release of their new recording, "chaser," VT brings new life to 70s, 80s, and 90s covers and also introduces progressive, new a capella originals. Their first CD, "tall cool refreshing," garnered a CARA nomination for Best Original Song in 1999. VT was again nominated in 2000 for a CARA when its second CD, "chaser", received the nomination for Best Pop/Rock Cover Song. Vocal Tonic can be seen performing around the South and has recently performed for the Atlanta Braves and on Channel 11's Peachtree Morning, an Altanta morning show.

With the production assistance of Rockapella¹s vocal percussionist Jeff Thacher, who also contributes vocal percussion to four tracks, Vocal Tonic¹s second CD is a dramatic step forward for the group. Current pop hits (the ubiquitous "Livin¹ La Vida Loca") and classic rock (Edgar Winter¹s "Free Ride"), along with six originals, are the vital ingredients; the formula, the solid arrangements. Vocal Tonic¹s easy rock style, as exemplified by "LightHouse" and "Whisper," is consonant and melodic, without becoming fatally trite. Clever touches such as their insertion of a verse of "Sunshine Of Your Love" into their own "Let It End," and the "instrumental" breakdown in "Free Ride" ­ which is super-tight and heavy ­ give this "Chaser" a flavor all its own.